The Swedish audiobook market has seen strong subscriber growth in 2021.

During 2021 (until Q3 2021), approximately 120 000 additional households in Sweden have signed up for a subscription to an audiobook service – 14% increase since the beginning of the year. Storytel, the market leader, shows stable household penetration while several of its competitors have grown.

Further, Mediavision recognizes that customers’ reasons for subscribing have shifted throughout the year. Previously, price was the predominant driver, whereas now customers have increased the focus on differences in content offerings between the services. Going forward, this could lead to a less volatile audiobook market, where churn levels may decrease. Today, churn for audiobook services is nearly double compared to streaming services for video and music. Unique, or exclusive, content plays a significant role in this context.

Newspapers sue Meta and Google for decimating their advertising

BritBox expands in the Nordics via C More partnership

This week, news broke that BritBox, a streaming service operated by ITV and the BBC is expanding to the Nordics via a partnership with C More. The service will be available Sweden, Finland, Denmark via C More and via TV2 in Norway. Pricing details are yet to be disclosed.

BritBox is a joint venture between ITV plc and the British Broadcasting Corporation (and its commercial arm BBC Studios on services outside the UK). BritBox first launched in the US in 2017. The service didn’t launch on its home turf until 2019. At the time of BritBox’s launch in the UK, ITV pledged to invest up to GBP 65 million in the joint venture over the coming two years. While it is unknown how much BBC has investment in the project, top management said that “they plan to invest tens of millions” into original content. With this expansion, BritBox will be available in eight countries (currently available in the US, UK, Australia, and South Africa) – and there are ambitions to expand to a total of 25 countries.

The world’s most popular social networks – and who owns them?

Today, more than 4.5 billion people worldwide use some form of social media, representing about 57% of the total global population. The social media audience is both widespread and diverse, regardless – a very limited number of actors own and control a majority of the most popular platforms. For example, Meta owns four out of the five most widely used platforms. This Visual Capitalist infograpgic offers insight into just how concentrated this market is. 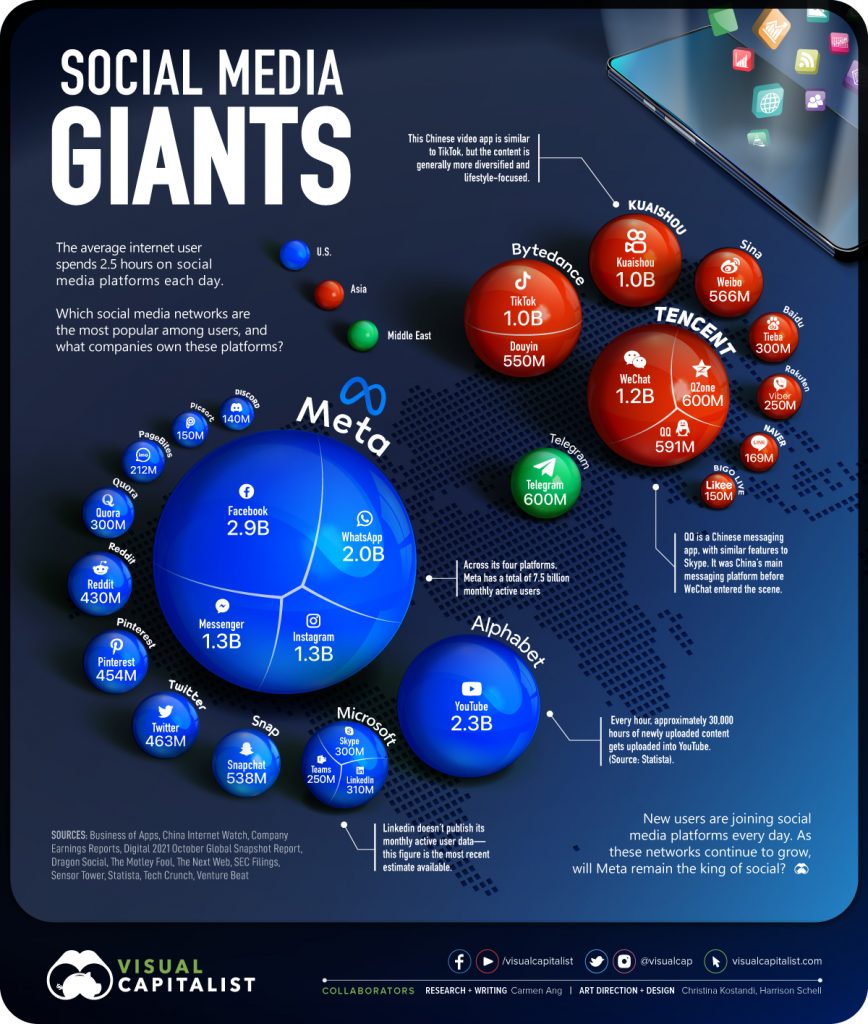