In addition to keeping you updated on the latest news and trends across video, text and audio, this week’s newsletter dives deeper into these headlines;

The appeal of Nordic content was proven once again this week, when the Norwegian series Atlantic Crossing won the award for best mini-series at the International Emmy Awards. The series is a co-production made for NRK by Cinenord. The series is also supported by Beta Film, PBS, SVT, DR among others – and follow the endeavors of Crown Princess Märtha and Crown Prince Olav during World War II.

Further, another series was added to the list of Nordic originals getting an international remake last week, when Lionsgate acquired the rights to re-record Riders of Justice to suit an English-speaking audience. The hugely successful Another Round is also set for an US-remake, while Viaplay’s Love Me will be adapted for the Australian audience. 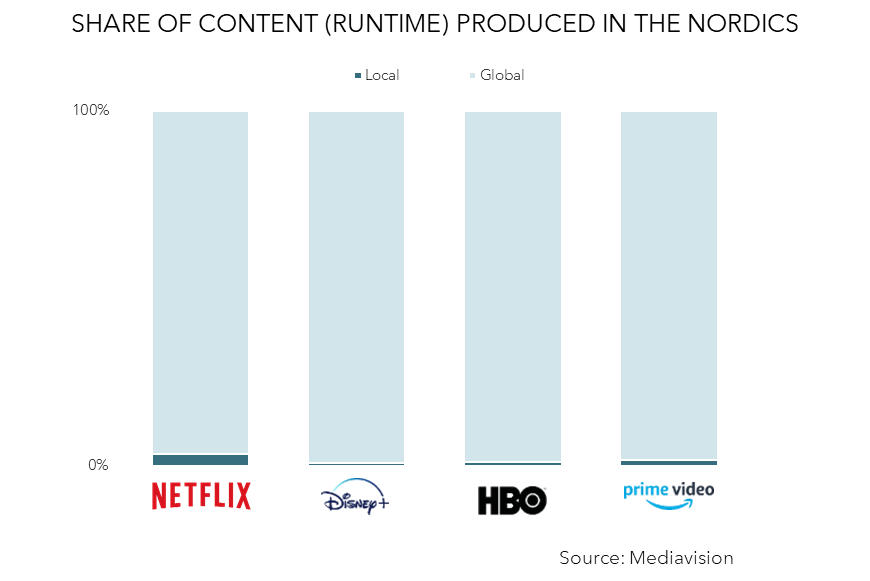 Nordic content is not only appealing for remakes, but the top global actors have all communicated ambitions to invest in local originals on their respective platforms. As of Q3 2021, Netflix had the highest share of local content available on its service, i.e. Nordic originals, co-productions and acquisitions.  This may not come as a surprise as Netflix has invested in local Nordic productions since 2016 (The Rain being the first to premiered back in 2018).

Going forward, we may expect the share of local content to increase on all global top services.

Netflix currently have 11 upcoming Nordic originals in the works, including Elves (premiering this Sunday), Anxious People (premiering on the 29th of December), Chosen, Blasted, and second seasons of Love & Anarchy, Snabba Cash and Young Wallander.

Disney Plus is yet to announce any Nordic original productions, but has stated that in 2022, the aim is to have +340 local or regional original titles in development and production.

The same goes for Amazon Prime Video, but the recent opening of a new office in Stockholm and launch of the Amazon Prime membership, testifies to an increased focus on the Swedish (soon Nordic?) market.

Paramount Plus added 1 million subscribers in one week

Yousee’s Xee to be See – NENT takes over editorial responsibility

Spotify has been busy this past week. In addition to launching in 6 new markets (including Venezuela and Iraq), the audio behemoth has announced that…

– It will make the “Lyrics” feature available to all global users, including both free and premium. Spotify confirmed that the “Behind the Lyrics” will be removed to make way for the new “Lyrics” feature. Lyrics will be available across platforms from the “Now Playing” view or bar, depending on the platform.

– Podcast subscriptions will be made available to creators in 33 new markets worldwide – including the Nordics. The service allows creators to mark episodes as “subscriber-only” content. In addition, Spotify launched a feature that allows creators to download a list of their subscribers’ contact information, in order to facilitate further development of their direct relationship with their audience.

– The service will no longer use “Shuffle” as the default option when a user hit play on an album. Reportedly, this move was made in response to a request made by Adele – citing that albums should be listened to in a specific order.

Further movements in the world of sports

Last week, SVT announced that the public service actor has acquired the Swedish rights to the World Championship in Athletics during 2024-2029. This acquisition means that SVT will broadcast four out of the five upcoming (2022-2029) outdoor World Championships in Athletics, with Telia being the rightsholder to the 2023 championship.

Further, NENT has presented two acquisitions in the world of sports this past week. First, the company and the Swedish Elite Football Dam (EFD) has entered a long-term partnership to show OBOS Damallsvenskan football (SE) from 2022 to 2026. The right covers 10 markets. Starting in spring 2022, seven live matches from Sweden’s top women’s football division will be made available every week on Viaplay. In Sweden, at least two games per week will be broadcasted on TV6, along with a weekly highlight show. Second, NENT announced on Monday that it has secured exclusive rights to the KSW (Europe’s leading mixed martial arts organisation), also across 10 markets. Viaplay will show every KSW event live in Poland and the Nordic and Baltic countries starting in December 2021.

In Denmark, the channel Sport Live, which produces content focused on Danish sports, has entered a new distribution agreement with Allente. Starting next year, the channel will be included in Allente’s Premium and Sport Standard packages.

On the global market, Apple is reportedly working on a new framework that could potentially improve sports streaming coverage within its iOS and Apple TV apps. Recently, rumours have been circulating on “deep talks” between Apple and the NFL – and new key hires including the appointment of the former head of Amazon Prime Video’s sports division to the Apple TV team has fuelled speculations on weather Apple is betting big on sports streaming.

Return to Hogwarts special to be available on HBO Max

Roku plans to develop +50 original shows in next two years

Strawberry Publishing to be named Bonnier Norsk Forlag AS

Today, there are around five billion internet users across the globe. Much of the world’s digital activity today is centred around the services and applications that we all use on a daily basis. Collectively, they produce inconceivable quantities of user activity and associated data.

This infographic from Domo shows just how much activity is going on in any given minute, and the amount of data being generated by users. And it’s a lot – to say the least. 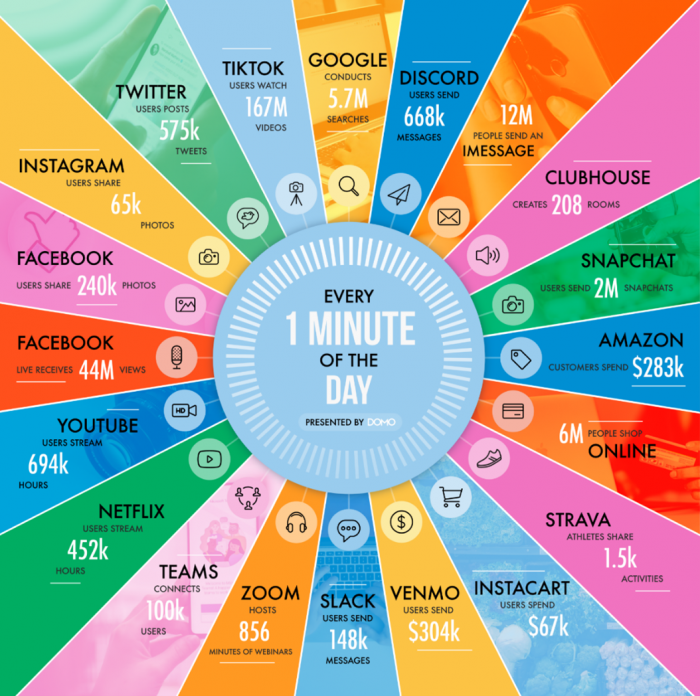