The topics in focus this week are:

Danish households’ appetite for video streaming continues to grow. The number of paid subscriptions now exceeds four million, as more than half a million new subscriptions have been added in the past 12 months. This is concluded in Mediavision’s latest analysis of the Danish TV and streaming market.

The interest in streaming video is reaching new record levels in Denmark. Household penetration for SVOD (such as TV2 Play, Viaplay and Netflix) now amounts to 66 percent, which is higher than in any other Nordic country. Growth year-over-year amounts to eight percent. This is concluded in Mediavision’s newly released analysis of the Danish TV and streaming market. 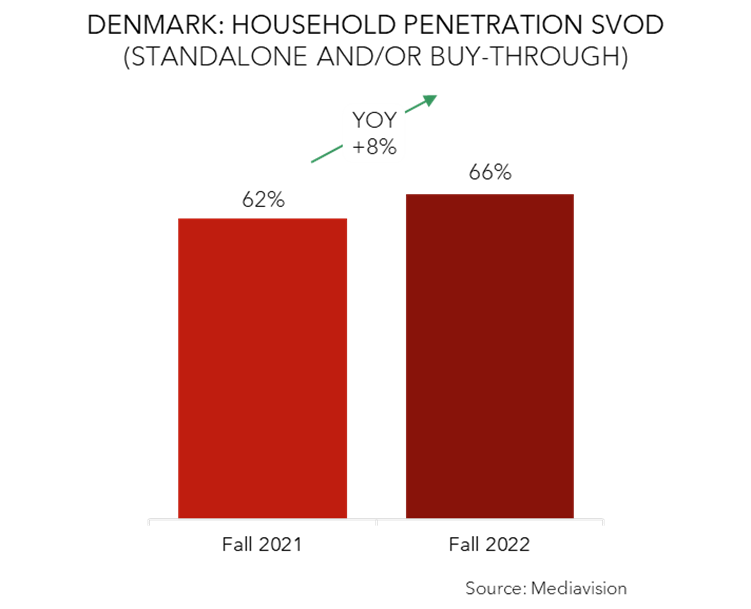 The nominations for the 2023 Golden Globe Awards were announced earlier this week. With 14 nominations each, HBO/HBO Max and Netflix are placed at the top among the streaming services for this year’s event.

The major contenders from HBO/HBO Max are the drama series The White Lotus with four nominees and Hacks with three. House of the Dragon and Barry also contributes to HBO’s nomination-pot with two nominations each.

For Netflix, both The Crown and Dahmer – Monster: The Jeffrey Dahmer Story has four nominations each. The drama series Ozark received three nominations and Netflix’s latest hit Wednesday has received two nominations, as well as Better call Saul. Last year, Netflix had the most Golden Globes nominations out of any streamer, 17 in total.

From the Nordics, Ruben Östlund’s Triangle of Sadness got two nominations, for best picture (musical or comedy) and Dolly De Leon, who plays the resourceful Abigail in the movie, is nominated for best supporting actress. This makes Ruben Östlund’s first ever double nomination at the Golden Globes Awards.

Also nominated is Icelandic composer Hildur Guðnadóttir, who has the chance to win best original score for Women Talking by Sarah Polley. Guðnadóttir was also nominated for the Golden Globes in 2019 for her work in Joker, which was successfully transformed into an Oscar win.

The 80th annual Golden Globe Awards will be held on the 10th of January in Beverly Hills, California.

The Swedish audiobook service Nextory is expanding its content offering. In a new agreement with Aller Media, it will now also offer digital magazines. Nextory will thereby become the first streaming service in Sweden to offer audiobooks, e-books, and magazines in the same app. Nextory already offers digital newspapers and magazines in France and Spain.

“Our subscribers have requested magazines for a long time and expressed that it would be convenient to have books and magazines in the same app. This investment is therefore a natural step for us. It will enrich the experience in the app, without any extra costs for our subscribers”, says Magnus Nytell, Chief Content Officer at Nextory. The audiobook service is currently in discussions with several other publishers and expects to add additional magazines and newspapers to its catalog soon.

Three years ago, another Swedish audiobook service, Storytel bought the online magazine service Ztory, to offer digital magazines. It was placed in a different app and the subscribers had to pay extra to get access to it. But in early 2021, Storytel shut down the Ztory-app. Now that Nextory expands to offer magazines and broaden its content range, it will be interesting to see if it will strengthen its position in the market and how other actors in the market will respond.