As we leave the Halloween festivities behind us, we can conclude that the immense popularity of film and TV expands beyond the screen – film and TV characters were the most popular Halloween costumes this year, making up 27% of Google-searches ahead of the holidays. Anyway, let’s shift our focus – this week, read up on:

Nine months have passed since the 5G auction was completed in Sweden – with four major telecom operators paying a total of SEK 2.3 billion for access to the 3.5 GHz spectrum.

Mediavision’s latest analysis of the Swedish TV & Streaming market concludes that as of Q3 2021, 35% of 15-74-year-olds state having 5G included in their subscription(s) to mobile telephony. However, if we remove those without the hardware to receive 5G, 23% remains. This means around a fourth of the population has a subscription to – and the hardware to receive – 5G in Q3 2021.

However, construction of the new network in Sweden has not proceeded as expected. Part of the delay is related to the worldwide shortage of semiconductors and issues with transportation.

According to own sources, Tre’s 5G network currently covers 7 cities and 16% of the Swedish population. Telia’s network is available in 25 cities, working towards the goal of being accessible to 90% of the population by the end of 2023. This goal is also set by Tele2, which stated that its 5G expansion will not proceed with full force until next year.

This means that the Swedish expansion is lagging its’ neighbouring Nordic countries, especially Denmark (where TDC Net has delivered the first nationwide 5G coverage) and Finland (where Elisa’s network reaches over 100 locations).

This analysis covers both the and TV- and streaming markets in Sweden. It rests on three pillars: the consumers, the market, and the actors. Analysing the consumers takes us far – but not all the way. Studying the actors and the market as a whole is just as important. Published quarterly.

– Among MAUs that engaged with podcasts in Q3, consumption trends remained strong
(+20% YOY on a per user basis)

DR to downgrade flow offerings in order to strengthen digital

Schibsted’s Q3 report last week showed proof of the business getting ‘back to normal’ after a challenging period during the pandemic. Revenue growth in the business segment ‘Nordic Marketplaces’, including Blocket (SE), Finn (NO) and Tori (FI), was highlighted as one of the main drivers behind the 21% growth YOY in EBITDA margin. Further, Schibsted’s News Media reached a milestone with more than one million purely digital subscriptions.

Mediavision’s Insight: Nordic Media & Markets tracks the progress of individual and household payments per service and actor, as well as overall media expenditures. The primary focus is mapping out the allocation of expenditures across audio, video, text, and access. Published bianually.

The past week has been hectic in the world of social media, kicking off with Facebook’s parent company name change to Meta last Thursday. For those of you who have not yet gotten a full grasp of what this metaverse actually entails – we can recommend this read.

In other Apple-related news, the company’s introduction of the App Tracking Transparency policy back in April is said to have caused a loss of nearly USD 10 billion for Snap, Facebook, Twitter, and YouTube – so far. The ATT policy forcing apps to ask permission before tracking users.

Meanwhile, Snapchat has announced a deal with NBCUniversal that enables users to use audio clips from its hit films and TV shows, including The Office, Parks and Recreation, Shrek and Saturday Night Live.

Walter Presents launches in the Nordics via C More

Regularly, Evan Shapiro and his team at ESHAP maps out the US media universe – which, as we all know, continuously changes and may be a bit challenging to keep track of. This is the latest edition, published last Sunday. 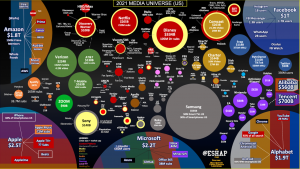