Mediavision’s latest analysis of the Nordic media landscape shows that Readly has a total of approximately 310 000 subscribing households in the Nordics as of fall 2022. Among the households that subscribe to a digital magazine service in the Nordics, more than half have chosen Readly – making it by far the most popular magazine subscription services in the region. The vast majority (approximately a 60 per cent share), of subscribing households are found in Sweden. It remains to be seen whether Readly can claim the top position in France as well. 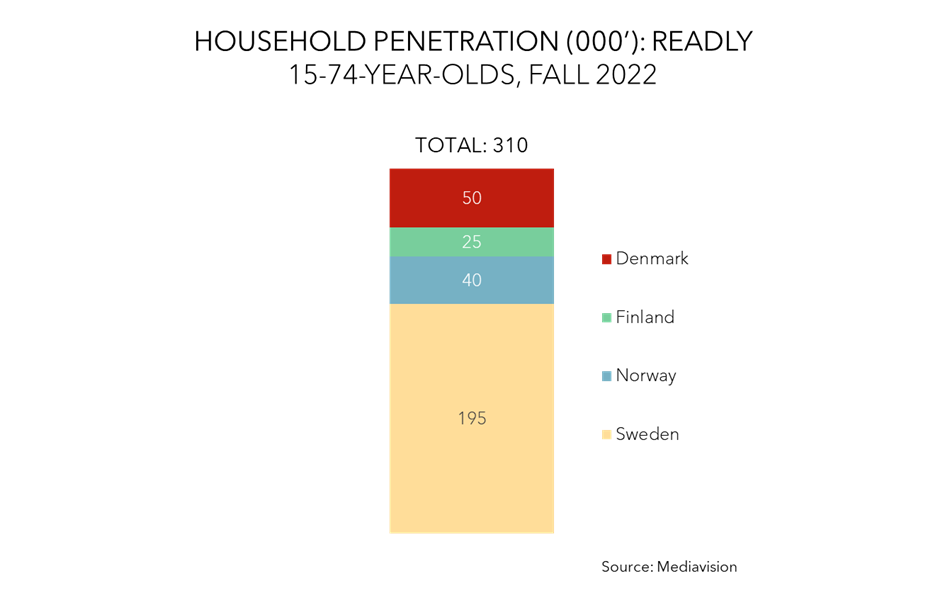 From start, Readly offers over 6,700 international magazines and newspapers, including French titles such as Libération, GQ, Cosmopolitan, and L’Express.

In October 2021, Readly acquired the French media company Toutabo, owner of digital newspaper service ePresse. Thereafter, the co-branding “ePresse par Readly” was launched, in November the same year. Since then, the integration of the two companies has been in the works. Now, the next step is here with the launch of Readly.

At launch, Readly also starts a three-month long campaign with a customer centric approach called Readly for the Reader. The starting phase of the campaign includes street marketing, competitions at subway stations in Paris and a branded trucks driving around Paris, showcasing the service’s content. The campaign mainly aims to build awareness of the newly launched service.

The service is priced at EUR 9.99 per month. But the French customers can try the new service for free, as Readly offers an introduction deal of two months for free.

Consumers in the newly added markets will have access to the same number of titles as those in the US, over 300 000. All titles are available for a one-time purchase through the Spotify Web Player. The company does not want to make the titles available through in-app purchases, since it would have to pay Apple or Google commission on the sales. When the title is bought on Spotify’s website, it will be available in-app for the user.

Spotify plans to add new features and formats to its audiobooks over time – as well as expanding to new markets. Information regarding a possible launch on the Nordic market has not yet been announced.

FilmRise expands to the Nordics with LG FAST partnership

Disney Plus has presented its first Nordic original series. The series is called To Cook a Bear and is based on the Swedish author Mikael Niemi’s book by the same name.

The new series takes place in the mid-nineteenth century, in the village of Kengis, in northern Sweden. To Cook a Bear consist of six episodes and centers around a Sami boy who develops a deep relationship with a local pastor, while investigating an unexpected murder mystery. Swedish screenwriter Jesper Harrie, famous for series such as Solsidan and Bonusfamiljen, is writing the script and Anagram Sweden is producing the series.

The the production company is in the final phase of writing the script and the choice of director still remains. According to Hans van Rijn, CEO of Disney in the Nordics and Baltics, “there might very well be another Nordic original releasing before To Cook a Bear”. Van Rijn emphasize that Disney Plus’ local productions must be deeply rooted in the countries’ culture and language. To Cook a Bear is not only Swedish, but also Finnish and Sami.

Disney Plus is not the only global streamer investing in Nordic content. Just a few weeks ago, Amazon Prime Video presented 18 new Nordic series. Netflix has been producing Nordic originals since 2012, as its very first original series was the Norwegian Lilyhammer. And now, Netflix has announced its very first unscripted Nordic series…

TV 2 take over the rights for Eliteserien and Obosligaen

Netflix has announced that it is making a Swedish version of the popular reality show Love is Blind. The series originates from the US, where single people who want to be loved for who they are rather than what they look like, will propose to someone – without ever having seen them.

The original US version of the show premiered on Netflix in 2020 and the third season of the US version launched in October this year. The format has been adapted outside of the US before, most recently in Brazil and the second season of Love is Blind: Brazil is set to launch later this year.

A launch date for Love is Blind: Sweden has not been announced yet, but production is planned to begin next year. The series will be produced by Mastiff.