The topics in focus this week are:

Consumer payments for podcasts increased by 50 percent during the third quarter of 2022, compared to the same period last year. Consequently, annual revenue from consumer payments on the Swedish podcast market is expected to surpass SEK 150 million in 2022. This is concluded by Mediavision in its latest analysis of the Swedish audio market. 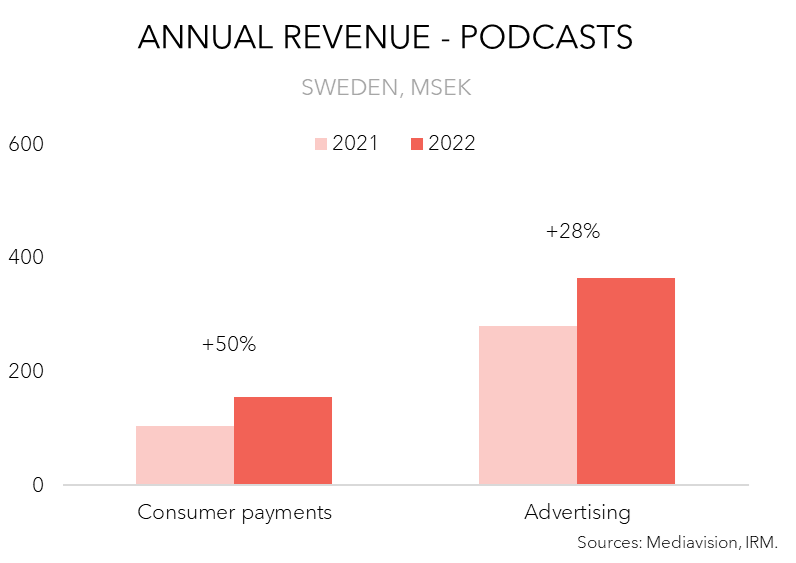 Bonnier News has made a public cash offer to buy the Swedish digital magazine subscription service, Readly. Just a few weeks ago, Readly launched in France and has now users in over 50 markets. Bonnier News is offering SEK 12 in cash per Readly share, which values the issued share capital of Readly to approximately SEK 455 million.

The offer represents 59.3 percent of the company in relation to the closing price of SEK 7.535 for Readly’s shares on Nasdaq Stockholm on 2 December 2022, which was the last trading day before the offer was made public. The CEO of Bonnier News, Anders Eriksson, says that “Readly fits well with our strategy, and we believe we can add a lot through our ecosystem of reach, content, distribution and marketing”. If the bid goes through, Readly will be split into two companies, as Bonnier News will handle the Nordic operations and the media group Cafeyn Group will handle the international operations. Cafeyn Group is an online magazine subscription service, similar to Readly.

The independent bid committee of Readly recommends that all shareholders accept the cash offer. The acceptance period for the offer expires on the 13th of January.

In 2016, Spotify launched Wrapped, which allowed users to look back at what they have listened to over the past year. Now, the Washington Posthas launched its own personalized annual review, that shows subscribers insights about the content they have consumed in 2022, in a visual format similar to Spotify’s Wrapped.

The Washington Post call the new feature Newsprint. The feature brings the readers information such as the number of stories they have read, how many topics they have engaged with, and which journalists they read most often. Newsprint also makes suggestions for stories the reader may have missed, newsletters to subscribe to, and other authors to follow. The summary slide shows the factoids as ridges on a fingerprint.

The chief subscriptions officer at the Washington Post, Michael Ribero, said the Post “wants to build on Newsprint and use it as a feature to help attract new subscribers and increase brand awareness through social sharing in future years”.

This format of cleverly transforming user data into an engaging product seems to be a success – at least for Spotify. In 2021, Spotify’s Wrapped was mentioned in 1.2 million posts on Twitter and the streaming company’s mobile app downloads increased 21% the week that the feature launched. Apple Music, Deezer and Youtube Music are music streaming services that have followed Spotify in releasing year-end summaries for their users. Perhaps this format will expand to even more new media types and companies, to create engagement around their user data.