Mediavision: Three million SVOD subscriptions in the Nordics are borrowed from another household

Shared streaming subscriptions have been a hot industry topic lately. And for good reason, as it means lost revenues for the actors. As many as three million SVOD subscriptions in the Nordics are currently accessed using another household’s subscription. This is concluded in Mediavision’s latest analysis of the Nordic TV and streaming market.

Three million SVOD subscriptions in the Nordics are currently borrowed from another household, i.e., giving access to the service without paying for it. Looking at all subscriptions for the 15 largest SVOD services, close to 20 percent is shared with a non-paying household. Netflix has the highest share of borrowed subscriptions, with close to a million Nordic households stating they have access without paying. This is shown in Mediavision’s latest analysis of the Nordic TV and streaming market. 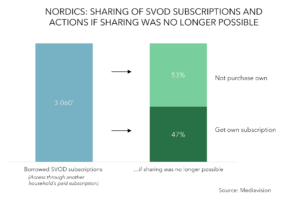 The Olympics are coming back to public service in Europe

This Monday, the International Olympic Committee announced that the media rights in Europe for the four Olympic Games that will be held 2026-2032 have been given to the European Broadcasting Union (the joint organization for public service in Europe) and Warner Bros. Discovery.

For the Nordics, this means that DR and TV 2 will share the broadcasting rights in Denmark, Yle will broadcast the games in Finland, NRK in Norway and SVT in Sweden. Under the new agreement, Warner Bros. Discovery will hold full pay TV rights in 43 European territories, although, the Nordic countries are excluded. As the new agreement covers the 2026-2032 period, it includes the 2026 winter games in Italy, the 2028 summer games hosted by the US, the 2030 winter games, which host is still unannounced, and the summer Olympics in Australia 2032. The agreement does not include the upcoming 2024 Paris summer Olympics. 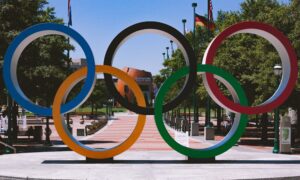 The Olympic Games includes several sports, though the summer games are mainly associated with athletics, and the winter games with the various skiing sports (and ice hockey in Finland and Sweden). The Olympics is also a time for viewers to find new sports, idols, and for many sports to promote themselves to a greater audience.

Among people 15-74 years old in the Nordics, just over 40% are interested in watching sports via television/streaming. The sport with the highest interest is football, followed by ice hockey, winter sports and athletics. The non-Olympic sport that yields the highest interest is motorsport, at 9% of interest (the same level as handball – whose world championship is currently being held in Sweden and Poland). Local variations occur, for more information, please contact Mediavision.

YouTube has reportedly started testing free ad-supported TV channels. The Alphabet-owned company is in dialogue with several entertainment companies to show its content on the new service. A small number of partners are currently testing the concept, including Lionsgate and A+E Networks.

Youtube is already a dominant player on the market for online video and the possible addition of ad-supported streaming TV channels will put the company in competition with companies such as Pluto TV and Roku. YouTube has already started to provide premium ad-supported content. In 2022, the streamer added free television shows that were supported by ads to its catalog in the US, and the company has been doing it with movies for years.

The company also has YouTube TV, a paid service that gives people a similar experience as the standard television channels. In July 2022, it was announced that YouTube TV had reached five million subscribers. No information regarding the name and placement of the new service has been released, but it is possible that the free channels would be placed under the YouTube TV brand. As the new feature is now in testing, reports say that it could roll out more widely later this year.

Spotify reckons it has over 5,5 million podcasts.

Telenor level up their TV packages

HBO Max announces first price hike in the US