The earnings season isn’t over just yet – this week, Disney will present the results for its fiscal fourth quarter and full year 2021. Ahead of the report, we thought it would be useful to get a quick look at the current state of the industry – see below for a compilation of the latest reported SVOD figures from major players.

Last Friday, Storytel reported its earnings for the third quarter. Net turnover (including streaming and books) grew by 17.3% compared to last year to a total of SEK 714 million in Q3 2021. EBITDA amounted to SEK -12.4 million – much better than the expected -50 million. Streaming sales amounted to 583 million in Q3 2021, an increase of +19% compared to the same period last year.

Despite this, the company (once again) lowered its forecast for total number of paying subscribers in 2021 to 1.82-1.84 million, from previous estimate 1.95-2 million. The downgraded forecast is derived from the Indian market, where churn has increased as a result of the Indian government banning recurring card payments. Following this, Storytel’s stock fell -16,9% on Friday, but has since bounced back.

In conjunction with the report, Storytel also stated that…

Net sales grew by 89% compared to Q3 2020, and amounted to SEK 256.1 million in Q3 2021. EBITDA amounted to SEK -42 million. The operating loss was SEK -52.7 million. Total “listens” reached 891 million and average revenue per listen improved to SEK 0.30, from SEK 0.17 in the same period 2020. The number of shows available on the Acast platform reached 35,000. Further, Acast communicated that it will collaborate with Samsung in an international partnership, where Acast will be one of the inaugural partners for the European launch of Samsung Free, a new podcast app.

Google News in Spain to reopen after government amends rules

The reports season isn’t finished just yet. Today, Disney will present the results from its fiscal full year and Q4 2021. Mediavision’s latest analysis of the Swedish TV & Streaming market concluded that new Disney Plus subscriptions made up more than half of all net additions of SVOD subscriptions in the past 12 months.

So, what is the market expecting from Disney’s report? The consensus mark for revenues is set to USD 18.77 billion, implying a growth of +27,6% compared to the same quarter last year. Among other things, Disney is expected to have benefitted from the success of Shang-Chi and the Legend of the Ten Rings, the growing popularity of Disney Plus, and a bounce back in revenues from parks, experiences, and products.

This week, Disney communicated a special offer on Disney Plus as part of the company-wide ‘Disney Plus Day’ promotions. Starting Monday (Nov 8th) through Sunday (Nov 14th), new and eligible returning Disney Plus subscribers can aquire the service for EUR 1.99 (available in all Nordic countries) for one month. Further, Disney has announced the premiere of 13 movies from the Marvel Cinematic Universe adapted to the IMAX projection format.

So, the question is – how big of a leap towards the top has Disney Plus taken in this past year? As of today, these are the latest subscriber figures reported by the top services. 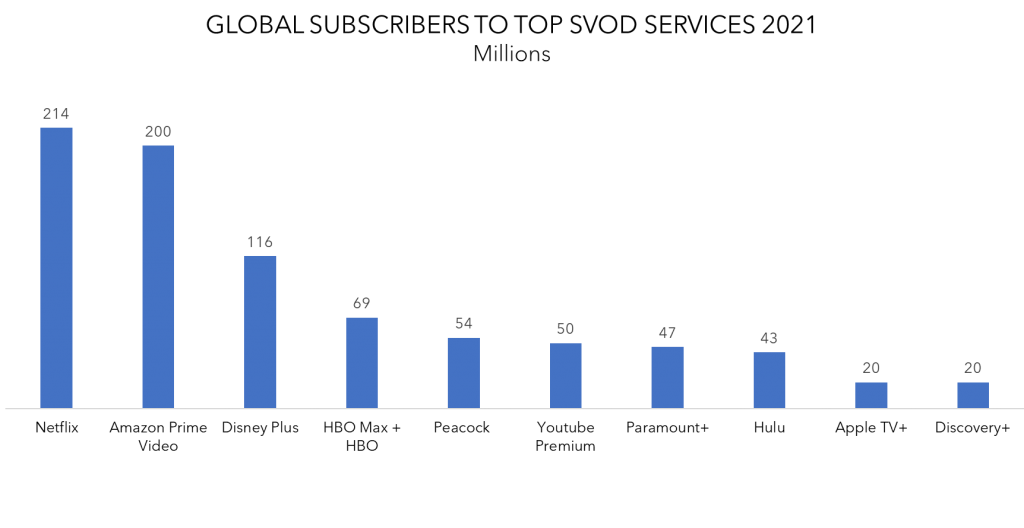 Netflix reamins at top – but for how long? Research from Digital TV Research show that Disney Plus could surpass Netflix by 2026.

Amazon does not report Prime Video subscribers separatly, but occasionally communicate the total number of global Prime Members. This latest figure, presented here, was released in Q1 2021. The Amazon Prime membership was made available to Swedish consumers this fall, but is not yet offered in the other Nordic contries.

Peacock – this figure was communicated in Q2 2021. Comcast did not release any new figures in Q3 but cited “growth of a few million” during its earnings call. Note that Peacock include free signups in this figure, whereas the number of “monthly active accounts” is significantly lower – around 20 million in July 2021.

Youtube Premium – this figure was released in Q2 2021, note that it includes subscribers to both Premium and Music offerings.

Paramount Plus – this figure also include other streaming platforms from ViacomCBS, e.g. Showtime. However, the company’s Q3 2021 earnings report stated that “subscriber additions in the quarter were led by Paramount+”.

Netflix to make games available via the App Store on iOS

It’s certainly no secret that a few large players grabs a significant piece of the advertising market. This infographic from eMarketer tells us how much – and a possible development going forward. 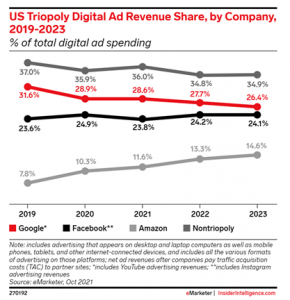 Lionsgate is officially exploring a sell of its Starz channel