This week, we focus on…

During the past second quarter, Mediavision has analysed how the market for TV & streaming in Sweden is affected by the households’ increasing concerns about the economy. The analysis shows that households in Sweden continue to pay for their streaming subscriptions and that the market is growing according to trend. This results in a record quarter for the paid streaming market. 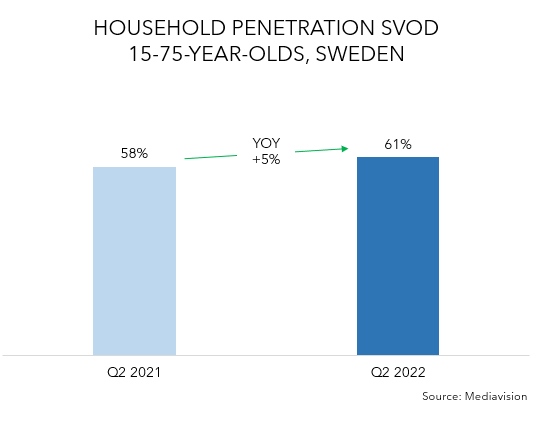 The household penetration for paid streaming services, such as Viaplay, Cmore or Netflix, amounted to 61% in the second quarter of 2022. This is a significant increase of 5% compared to the same period 2021 and a consistently stable growth rate. Growth is also noted in terms of the number of subscriptions per household (also known as stacking). Today, a subscribing household pays for 2.2 services, on average. This means that 600 000 new streaming subscriptions have been added since the same period last year, which is a new record. The Swedish paid streaming market is now approaching 6 million streaming subscriptions.

The full press release with commentary from Mediavision’s CEO is available here.

CBS Sports will remain the home of European club competition Champions League in the US as Paramount has renewed its rights deal with UEFA in a six-season extension. The deal is reportedly worth USD 250 million per year and includes all men’s Champions League, Europa League, and Conference League matches that will be live streamed on Paramount Plus.

The new agreement is significantly more expensive than Paramount’s existing USD 100 million per season deal that expires in 2024. Part of the reason for this is that in 2024, the Champions League will move to the ‘Swiss Model’. This means that the competition will almost double in size (from 125 games per season to 225 games), and that the total number of teams will increase from 32 to 36.

Earlier this summer, the Champions League rights in the UK from 2024 was sold. Under the new agreement, Amazon broke BT’s domination on live Champions League football in the UK. In addition, highlights are set to air on BBC for the first time – details can be found here.

In the Nordics, the rights to Champions League are currently held by Viaplay (DK), Telia (FI & SE) and TV 2 (NO), but as all of those contracts expire in 2024, it is safe to assume that UEFA will enter negotiations also in the Nordic countries soon. According to the newly released Mediavision Sports Analysis 2022, Champions League obtains the second highest viewing interest of all sports rights in the region. 2.5 million 15-74-year-olds are explicitly interested in watching this league. But not only that, the Champions League is also attracting a high share of paying households in the Nordics – which clearly points at how important this right is to both Nordic consumers and media companies.

Spotify and Apple have been the two undisputed champions on the podcast market for long. However, they may be facing increasing competition. This week, according to several sources, both Twitter and YouTube appear to be joining the fray.

YouTube launches dedicated podcasts homepage in the US – Nordics next?

There has been talk of Youtube adding a dedicated podcast homepage to its service for quite some time. This week, YouTube confirmed that this new podcast destination is now available for US users. In other words, a strong indication that the company is getting more serious about its podcast investments (and, likely, the potential for new ad revenues). The new home page contains popular episodes, playlists, and recommendations. So far, this feature is only available in the US. For sure interesting if the feature would be launched globally.

Even though this new homepage feature has not been launched in Sweden, Mediavision can reveal that YouTube is already the third most popular platform for podcast listening (among daily listeners 15-74-year-olds) during Q2.

But Youtube is not the only one to invest in podcasts. A few weeks ago, Spotify launched a similar feature – a new home tab that will create separate feeds for music and podcasts.

The social audio trend – ignited by the launch of Clubhouse – was brief, at least if judging by Clubhouse popularity. Nevertheless, Twitter has continued to develop its Clubhouse-like feature “Spaces” and its dedicated audio tab. According to findings in the back-end code of the app, Twitter’s next big bet in this area will be incorporated into the app soon. It is a new ‘Stations’ feature, including popular podcasts alongside Spaces.

Cineuropa asks the experts: Why is piracy increasing in the Nordic countries? – Cineuropa